skip to main | skip to sidebar

The Bear - Film by Jean-Jacques Annaud

The Bear - Film by Jean-Jacques Annaud


The little bear is - representative of children, The cougar seems as a human child/woman abuser and the river is the social context- courts,police,justice and social services system. Humans live in the same world- and share its attributes. Shades of Carl Sagan's book- Shadows of Forgotten ancestors. Possibly mothers could mother -if systems didn't help the abusers - - -

We "expect" this scenario in the "animal" world- and choose not to recognize that, we too, are a part of that world. Not apart. In our refusal, we destroy our young.
Posted by Cold North Wind at 17:30 No comments: 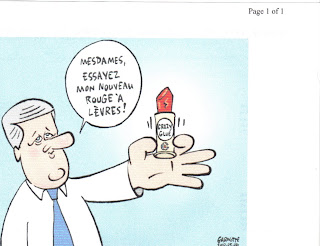 Antonia Z of the Toronto Star expanded on the superb cartoon of Harper's lipstick in Le Devoir, by informing us that the PM has a new makeup company. However, she doesn't seem to know about some of the other products that are in development. They include, for example, eyeshadow. The line is called Noir and has a shade for each day of the week- to be applied in order. One starts with red, then in order, black, purple, blue, green, yellow and finally, gray.

According to a leak- several scents are being prepared for market.The first is called Eau de Secret.

This company- which is public - is called :  Conall.

If anyone hears of other products under development by Harper's Conall company- please email me or write it up for everyone !
(anyone hear the name of the lipstick ? I heard maybe-Ginapink) they plan to test in Africa somewhere - -
Posted by Cold North Wind at 17:28 No comments:

we are in
CanadianPlanet
canada's webs

Watch videos at Vodpod and more of my videos